Hybrid ICN is an architecture that brings ICN into IPv6 as described in [1]. By doing that, hicn allows to generalize IPv6 networking by using location-independent name-based networking. This is made either at the network layer and at the transport layer by also providing name-based sockets to applications.

hicn allows to reuse existing IPv6 protocol and architectures, to extend them and deploy hybrid solutions based on the use case and application needs. Moreover, hicn can exploit hardware and software implementations heavily based on IP, making much simpler insertion of the technology in current networks, current applications and design future applications reusing what the industry already provides in terms of on the shelf components.

hicn is composed of network and transport stack for a variety of platforms. It supports end-host operating systems by using a portable and lightweight forwarder in C11 and a server oriented network forwarder based on VPP. The transport stack is implemented as a shared library written in C++11 where different transport protocols can be implemented based on the application needs. The early release will support a reliable transport protocol that is throughput optimal (à la TCP) and a transport protocol that can carry audio/video for real-time communications. The transport library provides an API for application that is based on INET socket API with in addition a post-socket API based on [5],[6],[7]. Both network forwarders will be equipped of binary APIs to provide a CLI as well data-model driven management features.

The project will have strong interactions with other fdio projects such as VPP, CICN in the first place and with DMM in the future.

Several applications will be supported from early releases such as HTTP, RTP where many-to-many communications, mobility and multi-homing is important. Some relevant applications include, but are not limited to, MPEG-DASH, WebRTC, heterogenous access (LTE/WiFi), mobile edge offloading (V2X, IoT), mobility management ([2],[3],[4])and cloud-native applications (service-mesh, micro-services communications).

In more detail, early releases would include:

Slide Deck on the Introduction

All infra issues require to file a ticket to the Linux Foundation via the following page.

hICN releases are distributed every quarter (End of Jan, Apr, Jul, Oct) based on calendar versioning , i.e. YY.MM. The master branch is always tagged with the latest release which is the latest VPP stable release. As soon as a new VPP release is distributed the hICN master branch will merge code from development branches and keep it in sync with the newly released VPP distribution. The server stack of hICN project, based on VPP, is guaranteed to work with the latest stable VPP release only.

The client stack is unaffected by VPP release management. 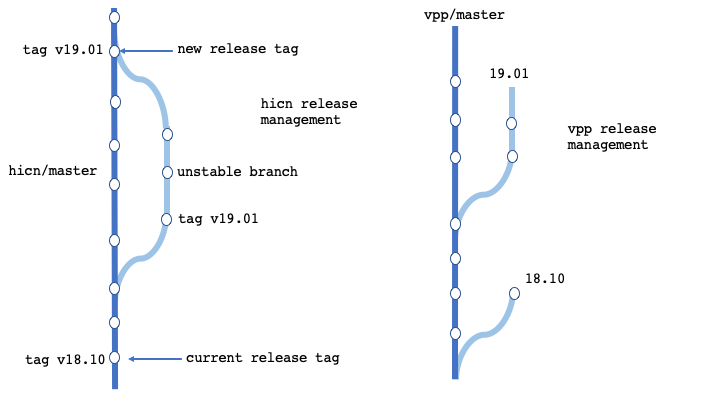