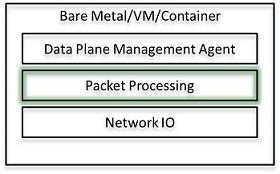 The VPP platform is an extensible framework that provides out-of-the-box production quality switch/router functionality. It is the open source version of Cisco's Vector Packet Processing (VPP) technology: a high performance, packet-processing stack that can run on commodity CPUs.

The benefits of this implementation of VPP are its high performance, proven technology, its modularity and flexibility, and rich feature set.

The VPP technology is based on proven technology that has helped ship over $1 Billion of Cisco products. It is a modular design. The framework allows anyone to "plug in" new graph nodes without the need to change core/kernel code.

The VPP platform is built on a ‘packet processing graph’. This modular approach means that anyone can ‘plugin’ new graph nodes. This makes extensibility rather simple, and it means that plugins can be customized for specific purposes. 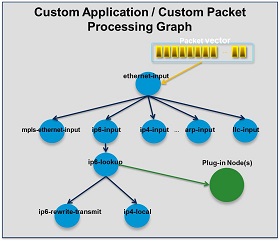 How does the plugin come into play? At runtime, the VPP platform grabs all available packets from RX rings to form a vector of packets. A packet processing graph is applied, node by node (including plugins) to the entire packet vector. Graph nodes are small and modular. Graph nodes are loosely coupled. This makes it easy to introduce new graph nodes. It also makes it relatively easy to rewire existing graph nodes.

A plugin can introduce new graph nodes or rearrange the packet processing graph. You can also build a plugin independently of the VPP source tree - which means you can treat it as an independent component. A plugin can be installed by adding it to a plugin directory.

The VPP platform can be used to build any kind of packet processing application. It can be used as the basis for a Load Balancer, a Firewall, an IDS, or a Host Stack. You could also create a combination of applications. For example, you could add load balancing to a vSwitch.

The engine runs in pure userspace. This means that plugins do not require changing core code - you can extend the capabilities of the packet processing engine without the need to change code running at the kernel level. Through the creation of a plugin, anyone can extend functionality with:

The full suite of graph nodes allows a wide variety of network appliance workloads to be built. At a high level, the platform provides:

The following is a summary of the features the VPP platform provides:

Why is it called vector processing?

As the name implies, VPP uses vector processing as opposed to scalar processing. Scalar packet processing refers to the processing of one packet at a time. That older, traditional approach entails processing an interrupt, and traversing the call stack (a calls b calls c... return return return from the nested calls... then return from Interrupt). That process then does one of 3 things: punt, drop, or rewrite/forward the packet.

The problem with that traditional scalar packet processing is:

By contrast, vector processing processes more than one packet at a time.

One of the benefits of the vector approach is that it fixes the I-cache thrashing problem. It also mitigates the dependent read latency problem (pre-fetching eliminates the latency).

This approach fixes the issues related to stack depth / D-cache misses on stack addresses. It improves "circuit time". The "circuit" is the cycle of grabbing all available packets from the device RX ring, forming a "frame" (vector) that consists of packet indices in RX order, running the packets through a directed graph of nodes, and returning to the RX ring. As processing of packets continues, the circuit time reaches a stable equilibrium based on the offered load.

As the vector size increases, processing cost per packet decreases because you are amortizing the I-cache misses over a larger N.

Example Use Case: VPP as a vSwitch/vRouter

One of the use cases for the VPP platform is to implement it as a virtual switch or router. The following section describes examples of possible implementations that can be created with the VPP platform. For more in depth descriptions about other possible use cases, see the list of Use Cases. 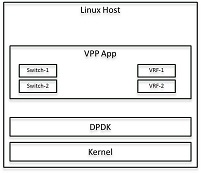 You can use the VPP platform to create out-of-the-box virtual switches (vSwitch) and virtual routers (vRouter). The VPP platform allows you to manage certain functions and configurations of these application through a command-line interface (CLI).

Some of the functionality that a switching application can create includes:

Some of the functionality that a routing application can create includes: 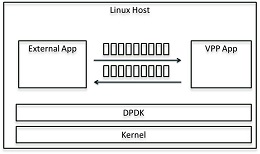 One approach is to implement a VPP application to communicate with an external application within a local environment (Linux host or container). The communication would occur through a low level API. This approach offers a complete, feature rich solution that is simple yet high performance. For example, it is reasonable to expect performance yields of 500k routes/second.

This approach takes advantage of using a shared memory/message queue. The implementation is on a local on a box or container. All CLI tasks can be done through API calls.

The current implementation of the VPP platform generates Low Level Bindings for C clients and for Java clients. It's possible for future support to be provided for bindings for other programming languages. 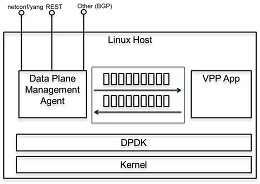 One example of using a high hevel API is to implement the VPP platform as an app on a box that is running a local ODL instance (Honeycomb). You could use a low level API over generated Java Bindings to talk to the VPP App, and expose Yang Models over netconf/restconf NB. 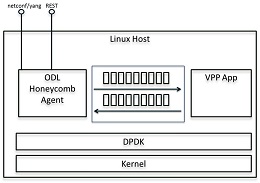 This would be one way to implement Bridge Domains.

Some of the primary characteristics include:

Improved fault-tolerance and ISSU when compared to running similar packet processing in the kernel:

Runs as a Linux user-space process:

Integrated with the DPDK, VPP supports existing NIC devices including:

The vector method of packet processing has been proven as the primary punt/inject path on major architectures.

One of the benefits of this implementation of VPP is its high performance on relatively low-power computing. This high level of performance is based on the following highlights:

The VPP platform has been shown to provide the following approximate performance metrics: 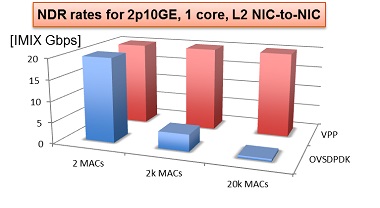 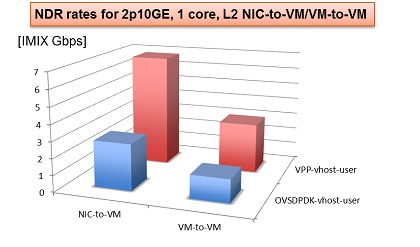 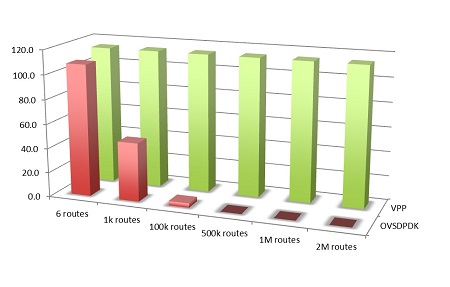