Honeycomb is a generic NETCONF/RESTCONF java-based management agent and provides a framework for building specialized agents.

It uses many features and utilities from different Opendaylight (ODL) projects (e.g. yangtools, controller, mdsal and netconf). The biggest use case of honeycomb is VPP (fd.io’s Vector packet processor). Honeycomb delivers a management agent to enable integration of VPP with e.g. SDN controllers such as Opendaylight. 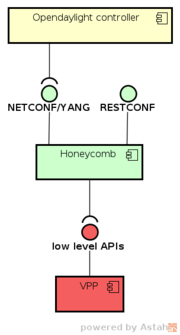 Honeycomb provides a distribution to control VPP. However HC is developed as a generic agent that can be positioned on top of any other software/system etc. that can be controlled from Java(or some other JVM language) code. This is achieved thanks to the modularity of HC enabling any "translation plugin" such as V3PO (VPP core management translation code) to work in HC framework.

Honeycomb provides a minimal distribution that contains only:

This section is devided into 2 sections: in-scope and out-of-scope to clearly define what is developed as part of Honeycomb project and what will be just reused from other projects (or where Honeycomb relies on other projects).

Backlog can be found in: Honeycomb's JIRA.

Current sonar analysis can be found at: Honeycomb's sonar