The VPP project currently uses Doxygen as the mechanism to generate documentation. This is predominantly focused on providing developer-focused information but it can also be used to generate user-focused details.

Doxygen works by parsing source files and identifying special comment blocks that are adjacent to identifiers in the code. We have Doxygen configured to generate output for items that are not yet documented so that at the very least the names of function parameters or structure members are visible.

This wiki page aims to cover how developers can go about producing documentation. Whilst it will cover a number of Doxygen features, readers are encouraged to review the Doxygen documentation and in particular special commands page.

The language of written documentation in VPP is English. It is tempting, as developers, to write tersely with the belief that doing so will adequately convey the relevant details. This should be avoided since readers of the resulting documentation may find the text halting and lacking context. This is especially true if English is not the readers' native tongue.

As a consequence documentation should be written with structurally correct English complete with capitalization, sentences and paragraphs where appropriate. Assumptions regarding context should be avoided. Spelling mistakes and grammar are easily fixed later; structure and context are much harder to fill in.

In an ideal world we would document everything; however given the realities of life and open source projects here are a list of items that should be prioritized for documenting and where the better the documentation the better able VPP is to mature:

In general, static and inline functions within modules are not visible outside that module and thus adding a documentation block may be of limited value (with exceptions, such as when used for function pointers for consumption elsewhere); though this does not excuse a developer from writing useful comments. However static and inline functions in header files are much more widely visible and should be documented.

In general, even though the purpose of an item may be obvious from its name, when rendered as documentation this implicit meaning is not always forthcoming. Thus it is recommended that such items not be skipped from consideration merely because the meaning seems plain. For example, structures (and unions) require documentation describing both the structure itself as well as all of its members. Similarly enumerations should have documentation both for the enumeration as a whole as well as individual items defined by it. It is very apparent in the generated documentation when developers only partially document these things.

Global variables must be documented. Since global variables are evil but are sometimes necessary we should encourage developers to justify their existence, to apologize to future programmers and beg their forbearance for the indiscretion.

To promote consistency both in the VPP source code and in the generated text, these are the conventions VPP have adopted for writing documentation.

Doxygen requires the use of specially marked comment blocks to identify documentation and recognizes several special commands inside those blocks. It provides several ways to indicate both of these things. Whilst any will work, VPP as a project has adopted the following as conventions:

Referring to identifiers in the text

Doxygen will automatically spot the names of known functions in the text and link those to the definition of that function. For other identifiers you must tell it to using @ref and this is encouraged in all places; note that not all things are linkable in this way (refer to the Doxygen documentation) but it is harmless to use @ref in such places.

For other items, such as function parameters, local variables or constants the use of @c is recommended. This will mono-space the text thus providing contrast with the surrounding text. Note that this works only for a single word; <tt> ... </tt> can be used for multiple words or @code ... @endcode for a C code block.

Describing functions and their parameters

Functions are typically documented with a docblock immediately before the function definition. They contain a brief description, a fuller description, a description of each parameter and information on any return values.

Otherwise common-sense should prevail. Describe what a function does, what its side-effects are and how it should be used. For more complex functions try to include examples of how to use it.

Describing function-like macros and their parameters

Macros can be documented just like functions with one significant difference: Doxygen cannot guess the type of each parameter or any return value and thus the documentation must mention parameter typing if it is important.

It's also important to mention the side-effects a macro may have or other local variables that must be present for it to work.

These commands have been added to Doxygen (using the ALIAS mechanism) to assist with documenting specific items in a consistent way.

See below in the node template section for an example of how this is used and to see now the node name is rendered within the documentation output. The index, when rendered, will look something like this: 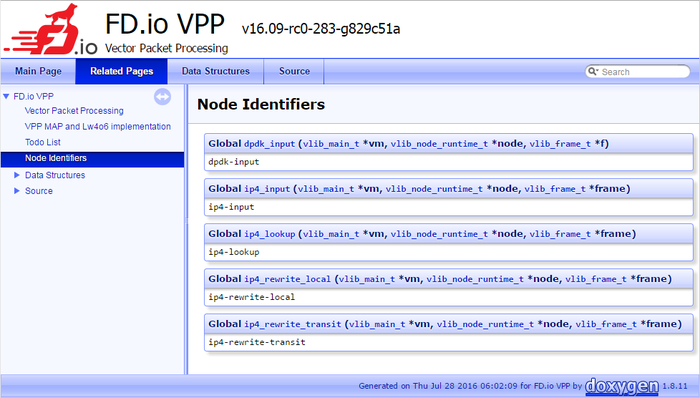 All of our source code files are required to include the Apache 2.0 license preamble. To properly document files they should also contain at minimum a brief description of the contents of that module and preferably a longer description to give some detail; for example, describing how to interact with it, the key functionality it provides and any special items of note.

Pay careful attention that the @file directive is provided as-is. It's tempting to add a filename after this directive but please do not do this, it only confuses Doxygen.

Also note that all @brief directives need to end in a '.' to terminate the directive.

So that directories are appropriately described in the file browser each directory with source code in should have a file with the name dir.dox. At minimum that file should contain a brief description of the contents of the directory but it could also contain a much longer description.

Refer to the file doxygen/dir.dox.sample:

Pay careful attention to the @dir directive; it must be provided as-is. It is tempting to provide a path after it but please do not do this; it often confuses Doxygen.

Also note that all @brief directives need to end in a '.' to terminate the directive.

Nodes form the core of what VPP does and providing meaningful documentation about their function is important. This is doubly so for those nodes which are direct ancestors or descendants of a node a developer is working; that individual will be looking for details on the features the surrounding nodes make available. Examples may include the metadata passed along in the buffer opaque data which will help a node understand where a packet came from. Some nodes will expect data in the opaque section in order to steer their behavior.

By way of example, here is the documentation block for the "ip4-lookup" node and which may be used as a template:

When rendered, this documentation block will look something like this: 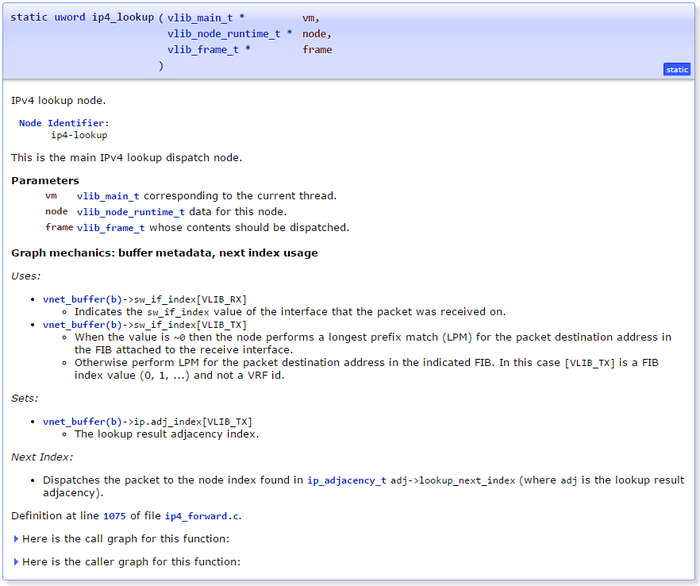 Rendered documentation for the "ip4-lookup" node

Of particular note this example describes these things:

In this case the bulk of the node functionality can be described in terms of the sw_if_index sections; other nodes may need to provide more verbiage in other sections of the text. In particular, where nodes have other side-effects those should be clearly documented.

Each CLI Command is defined and documented using the VLIB_CLI_COMMAND pre-processor macro. A special documentation comment, delimited by comment markers that look like /*? text-goes-here... ?*/, is added just before the VLIB_CLI_COMMAND macro call. A mechanism extracts this text along with the contents of the structure and passes it to Doxygen. Below is an example of how to document a CLI Command:

Once the documentation is generated, the above Doxygen encoding will produce the following output: 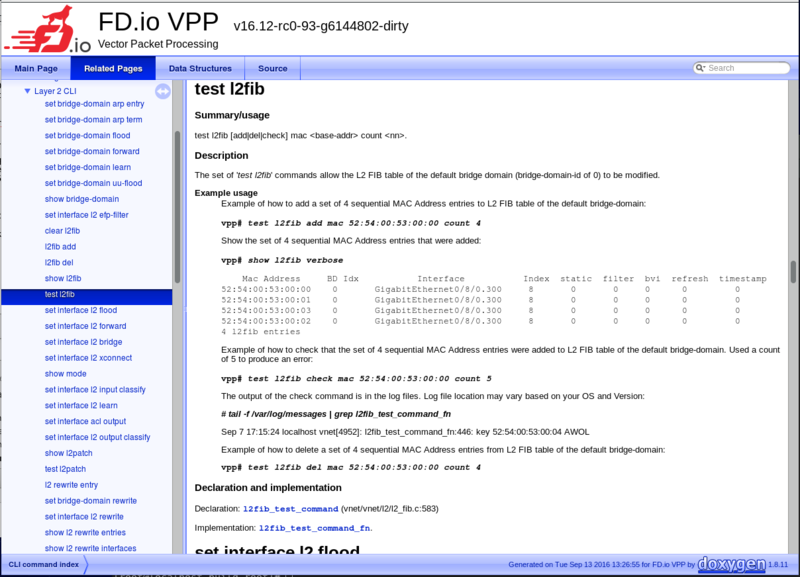 Below is a description of each section of the generated document.

The Summary/usage section is taken from .short_help variable of the VLIB_CLI_COMMAND section. The text associated with this variable is also used in the CLI help output. The current usage of this variable is to provide the command syntax. Longer term, new variables will be introduced so that there can be both a syntax and an abbreviated command description. For now, it is used as the command syntax.

NOTE: If the declaration name in the the VLIB_CLI_COMMAND pre-processor macro is real long, it may be tempting to break it across multiple lines. This causes issues in the parsing and will cause the associated generated documentation to end up on the wrong command.

The Description section is the text preceding the @cliexpar line. This section can span multiple lines and contain multiple paragraphs, separated by blank lines.

The Example usage section is the text from the @cliexpar line to the closing ?*/. Here are some points of interest in this section:

The @cliexstart{<cmd>} macro prepends the #vpp and makes the text bold.

The Declaration and implementation section is derived from .function variable of the VLIB_CLI_COMMAND section.

Adding a markdown file link to the User Documentation page

All documentation generation related dependencies are installed with the install-dep target of the top level Makefile.

The top level Makefile of the VPP build tree also includes a doxygen build target that will run Doxygen over the complete VPP source tree. Invoking that target will produce a significant amount of output and would look something like this:

By default only HTML documentation is produced and it is built in build-root/docs/html. If you build the documentation on a workstation then you can simply open index.html in that directory with a web browser to view it, for example:

Alternatively if you generate your documentation on a remote machine then an approach might be to add an HTTP server (such as Nginx or Apache HTTPD) to that host and configure it to expose the build-root/docs/html directory; one mechanism is to symbolically link to this directory from inside some other directory already visible from the HTTP server, assuming the use of symbolic links is allowed. Details on this are beyond the scope of this page.

Building documentation for a specific directory or file

Producing the documentation for the entire build tree can take some time which can become an issue if a developer is working on documentation for a specific module or directory tree. As a convenience it is possible to override the set of directories into which Doxygen will descend when searching for files to parse. For example:

or, if you wanted just one file:

You can also indicate several locations to look in by enclosing a list or directories and/or files in quotes:

Note that specifying wildcards here won't work unless the shell expands them first.

Cleaning up after Doxygen

It is also possible to clean up the Doxygen output directory. This can become useful since Doxygen does not itself remove files from the build directory on subsequent runs should they become redundant.

This is especially worth noting should you have previously built the documentation for the whole source tree and then want to build it for only one directory or file (using DOXY_INPUT); whilst unlikely, the remnants of previous documentation may interfere with subsequent Doxygen runs for a narrower scope.